Yeah, I'm still working on my Star Destroyer model. I'm on the final stretch, where I have to do the same thing something like 3,000 times. After that it's a few polygons and some smoothing to get the engines back to normal.

Also, I thought it'd be nice to know that the model itself has now officially surpassed 1.2 millions polygons.ALL.HAND.DONE.I'm taking a break from it in order to keep things going. If I didn't do this, I'm pretty sure I would kill myself.Now, everyone's probably like, "But Darthvender, you're so slow that the awesomeness of your model has pretty much been depleted."Well, while I've been taking this break, I've been rendering the crap out of the model, and I learned that I can set self luminance of a material, meaning I was able to awesomely light the entire hangar bay.http://i.imgur.com/eIZa0.pngUnfortunately, I seem to be getting these weird light refractions between some of the hull plates that seem to keep building up until they're bright white. Don't know what to do about that.Also, my computer got a virus a while ago, over the long weekend. Basically I sat around and quite literally stared at a wall for half the time. The other time I reintroduced myself with the wonders of Star Wars Battlefront II. I had almost forgotten how annoying it is when all your reinforcements are killed except for you and the enemy has 68 reinforcements left. This is one of my favorite games from the PS2, though, simply because the ground combat is pretty much awesome, especially when you get backed into corner and just blast everyone to hell.Also, I got a phone, which was acquired much as my rifle, if you remember; My dad bought it without telling me and now expects me to pay for it, so it looks like I'm getting a summer job.And, finally, my Socials Studies 11 course teacher is a huge Vancouver Canucks fan, and he told us before game 7 that if the Canucks won, we'd really like him and we'd have some fun things to do.Well, the Canucks won.And he assigned us a paper including title page, illustrations and an oral exam (which counts for 10% of our overall mark)I shudder to think what would have happened had they lost.

that model is sexy. 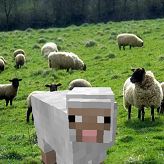 Holy carp! How much time have you spent on this?

I dunno. Put it on display in the Google Sketchup 3D Warehouse and be revered as a local god?

And maybe, If I can get the tech, do a nice shot of a Star Destroyer roaring over my house in the mountains.
KaBob799 11 years ago

Convert it to a minecraft model.

I wish. I've tried, but there is just not enough room.